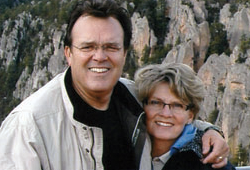 "The Second Amendment is the one that guarantees all of our other rights and freedoms and I realized that the NRA as an organization can do far more than I can as an individual to protect these freedoms. Each of us is responsible for helping to preserve the liberties we enjoy if they are to survive for future generations. By supporting the NRA our voices together will be heard. This isn't about guns, it is about our country." – Jack Simmons explaining why he and Donna choose to support the NRA.

"When I was a kid my dad would take my friends and me out to the New Mexico desert and drop us off with a canteen, a box lunch, my .22 single-shot rifle and a box of ammunition. We would spend the entire day plinking and target shooting. That sort of freedom is harder and harder to find these days, especially for young people," said Jack Simmons, who now lives in West Texas.

Despite such fond memories, Jack has never considered himself much of a shooter or hunter. Firearms have always represented something altogether different to Jack, they represent a treasured sense of camaraderie, responsibility and independence. It was this common interest in the strength of friends and family, of both self-reliance and of neighbor helping neighbor that brought Jack and Donna together.

Through friends they were introduced to the NRA and became involved with the Whittington Center, attending events there every year, and bringing new friends and new members to enjoy the company and the outdoors. "Being part of the NRA is all about being around like minded people who believe in God, family and country; people who feel strongly about their freedom and their independence," said Jack.

After more than 40 years together, Jack and Donna Simmons have built a successful insurance brokerage business, raised a family and been blessed with grandchildren. They decided to continue their support by donating two separate life insurance policies. "This was very easy to do and guarantees we'll protect our freedoms well into the future," said Jack.