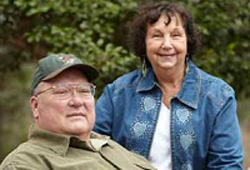 Firearms are a big part of NRA Life Member Don Hilligoss's life - but they aren't the most important things in his life. The most important thing in his life is his family and providing for them and their future. So it was no surprise that Don decided to use his lifelong passion for firearms as a way to provide for his family while at the same time giving back to an organization that is close to his heart - The NRA Foundation, Inc. By funding a charitable gift annuity with his 370+ piece firearms collection, Don was able to provide security for his family with a guaranteed income stream for life while generating a current tax deduction.

An NRA Life Member since 1975, Don is also a rifle, pistol, shotgun, and home protection certified instructor. He tells all his classes "if you shoot or own firearms, and you don't join the NRA - you're just riding on my back." Not just taking someone's word that they will sign up, Don estimates that over the years he has paid for 300-400 NRA memberships. He and his wife have been involved in the "Friends of NRA" banquet program by chairing 4 separate banquets. Giving back is nothing new to the Hilligoss family. If you ask Mr. Hilligoss if the NRA is a big part of his life, he will tell you "No, it is my life!"

At 62, Don retired but continued his love of firearms, shooting and hunting. With his loving wife Ronnie, his two daughters and his granddaughter, Don Hilligoss has a wonderful life - and A LOT of firearms. He began to wonder about the fate of his beloved collection. "Some of these firearms belong in collections, not in duck blinds," Don lamented. He began to look into where they could go that they would be loved, appreciated and cared for by someone as much as he had. He had thought about some museums but the thought of his wife Ronnie having to handle the disposition of the vast collection was disconcerting and overwhelming. Don also worried about security for the growing collection. He held onto his collection until he had a conversation with friend and NRA Advancement Officer, Don Chilcote about what he could do with his firearms collection. That is when Don Chilcote mentioned funding a charitable gift annuity with his firearms collection.

A Charitable Gift Annuity (CGA) is a way to make a gift to your favorite charity, and still receive a fixed and guaranteed income stream for yourself or others. It is an irrevocable contract under which a charity, in return for a transfer of cash or other property (such as firearms), agrees to pay a fixed sum of money for a period measured by one or two lives. The NRA Foundation, Inc. benefits at the end of the second annuitant's life. CGA rates are based on the donor's age and are set by the American Council on Gift annuities. A CGA can be funded with as little as $5000. In addition to the life income stream, donors also receive a charitable deduction.

Once Mr. Hilligoss decided that funding a charitable gift annuity with his firearms was the right decision for him and his family, the rest of the process was easy. The firearms were turned into cash to fund the annuity through a private auction with a nationwide audience. This helped to assure the best possible price for the collection.

It's that easy to turn your firearms into cash to fund a charitable gift annuity. The actual auction value of the firearms will be the amount that funds the annuity. There is no seller's fee or acquisition cost to the NRA. The NRA Foundation, Inc. and the donor also bear no expense in the auction process.

The best part for Mr. Hilligoss is knowing that his cherished firearms collection will be going to people who will cherish and enjoy them as much as he has. His wife and children will not have to worry about their disposition once he has passed and he is securing the financial future of his loved ones with a guaranteed life income stream. Finally, he is securing the future of freedom by designating The NRA Foundation, Inc. as the charitable beneficiary of the gift annuity.