Help Ensure the Freedom of Your Children and Grandchildren 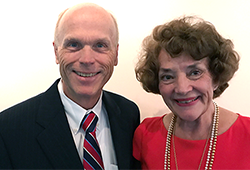 My wife Rachel and I are enthusiastic members of the National Rifle Association of America. When our friends at the NRA Office of Advancement asked us to tell you why we chose to include the NRA in our estate plan, we gladly agreed and would like to share our story.

We joined the NRA because we share a common bond with millions of NRA members. We love and appreciate America and understand that our Constitution as written has always provided us with a better form of government than any other. I have researched the history of the writing of the Second Amendment and know that it was added to make sure the people would have the power to resist those who would take away their liberty.

For most of my adult life I was not interested in firearms. As a youngster, I loved my BB gun, then target shooting with a .22 at summer camp. My brother and I walked down our street to the creek with our firearms and blew up cans filled with water with a .223 rifle, and made thrown cans fly higher with a shotgun. But, I did not shoot after my teens. About ten years ago, we got a summer cabin in the mountains. The first summer, a neighbor told me he had seen a bear walking through our yard. I had been working in a dead end space under the house. Yikes!

Being a bear's lunch was not in my retirement plans, so I started researching firearms online. The search for the right firearm also quickly revealed much about the modern legislative assault on the Second Amendment. With great interest I researched more.

We knew that our Founding Fathers investigated every form of government that had ever existed anywhere before creating our new government, taking the best parts of each. But it was news to us that it took these men, who had so recently been under the thumb of a king, a decade after writing our Constitution to figure out how to defend us from our own standing armies and the government they had created, should they abuse their power. It was that effort that led to the Second Amendment. Contrary to what we are often told now, many documents prove the Second Amendment was written expressly for these purposes.

One of them was an article in The Federal Gazette and Philadelphia Evening Post of Thursday, June 18, 1789 in its series on the meaning and reasoning behind the new amendments. It said of the Second Amendment, "As civil rulers, not having their duty to the people before them, may attempt to tyrannize; and as the military forces which must be raised on occasion to defend our country, might pervert their power to the injury of their fellow-citizens, the people are confirmed in their right to keep and bear their private arms." The Second Amendment is there to enable the people to defend themselves against tyrannical governments and dictatorial armies, and owning their private arms means it is an individual right to their own weapons. It is not unclear. British law was already "most clear and undeniable" that the king's "protestant subjects have a right to have arms for their own defense."

We are also amazed that there is a serious discussion as to whether people have a right to defend themselves when our Constitution says our God given rights include life, liberty and the pursuit of happiness. If we have a God given right to our lives, how can we not have the right to keep someone from taking away our lives? Only firearms can enable the weak and the old to protect their lives.

Laws restricting gun ownership do not just put us at risk from criminals; they are extremely hazardous to our liberty and lives. Look at what happened after the right to keep and bear arms was taken away in Nazi Germany, the Soviet Union, Communist China and countless other countries. The sequence was always the same; despots gained power, guns were registered, guns were banned, and the people on the registration lists were disarmed. The horrors then committed by those governments are warnings to us all.

Today, America is the only country on earth where our individual freedoms are protected by the right to own firearms, and that constitutional right is being infringed in more and more ways. It is a freedom that we must defend with all our might if we and our descendants are to remain free. The NRA is the foremost defender of the Second Amendment, and the Second Amendment is the primary defender of our freedom. Rachel and I decided the best legacy we could leave would be one that would help keep our fellow Americans free, and the best way to do that would be to help the NRA keep defending the Second Amendment. That is why the NRA figures prominently in our estate plan.

If you, too, would like to help ensure the freedom of your children and grandchildren, and believe that the NRA deserves your help, we would be happy to have you join us. Contact plannedgiving@nrahq.org or call (877) NRA-GIVE for more information. Consultations are free and confidential.