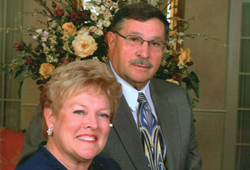 "We want to make sure that all Americans can live in a country where they can protect themselves and their families, where people are free to enjoy hunting and the outdoors. I am a patriot and I am proud to be free." – Janet Nyce on why she and Jim volunteer their time and donate to support the NRA Foundation

Jim Nyce grew up on a farm in rural Pennsylvania hunting and trapping. He met his future wife Janet while still a teen and wanted to share his hunting and shooting with her but that first experience firing a shotgun was, in her words "terrible." In the end it was good old American persistence that won out and Janet eventually got used to the shotgun and got a hunting license.

This experience and what she learned as a woman hunter led Janet to want to help other women enjoy the outdoors. She became an NRA Certified Shotgun Instructor, she mastered handgun shooting and obtained a carry permit, and has been a hunter for almost five decades, taking exotic hunting trips around the globe.

Jim and Janet Nyce raised three children and now have six grandchildren, all raised to appreciate the outdoors and the rural American traditions of family, independence and community. It is that spirit of community that led Janet Nyce to become a lifelong volunteer with the NRA, first with Becoming an Outdoor Women camps, followed by Women In the Outdoor events, Women On Target events and High Country Wilderness camps. She also became certified to teach "Refuse To Be A Victim," a life changing personal safety class designed for women by women.

Jim and Janet also became involved with Friends of NRA, the Youth Hunter Education Challenge and the NRA Youth Education Summit, which teaches young leaders the importance of the Constitution and the Bill of Rights. "I love sharing my joy of shooting and love teaching women and children how to be safe and responsible gun owners and hunters," said Janet. For all her efforts the NRA recognized Janet Nyce in 2010 with the Marion P. Hammer Woman of Distinction Award, "I owe so much to the NRA. I took my first shooting lessons from an NRA class." said Janet.

Although retired from their family-owned building and construction supply business, which continues to be run by the fourth generation of the Nyce family, Jim and Janet continue to donate to the NRA Foundation in support of the many programs they love. Additionally, Janet has set up a named endowment that will be funded through her will to benefit education, women, and youth programs.