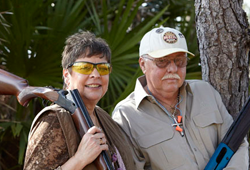 "We want to leave a legacy that will help preserve this country as we know it and as it is meant to be. Where the freedom we have enjoyed and the freedom my father fought for in the service during World War II, and so many others have fought and died for, will continue to exist. I looked around and I saw that when it comes to defending the Constitution and America's First Freedom, there is no better organization than the NRA," said John Rumpel on why he and Barbara have committed their commercial real estate into a trust to benefit NRA organizations.

New York City didn't offer many opportunities for a kid growing up to experience the shooting sports. But John Rumpel, raised on a steady diet of cowboy movies and westerns, didn't let that stop him. Carefree summer days at his family's property in rural Long Island were spent exploring the surrounding woods and target shooting with his .22 rifle.

That sense of independence and joy stayed with him and throughout his life John Rumpel has maintained a keen interest in freedom. When he and his wife Barbara were married and still living in New York, John's interest in firearms turned to personal protection and as a couple they both had carry permits. As real estate developers and passionate outdoor enthusiasts and boaters, John and Barbara eventually moved to Florida in 1987 where John obtained one of the first carry permits in that state, renewing their interests in shooting and personal protection.

The Rumpels want to make sure that the important work of the NRA Foundation and the Whittington Center continues and they have planned accordingly by establishing a trust to benefit both organizations. They want to make sure that the NRA remains strong and able to recruit and train young people, and that the opportunity to enjoy the outdoors and the shooting sports are preserved.

"Careful estate planning is allowing us to control the money we leave behind and instead of it going to taxes, it will be put to work supporting the principles and goals in which we believe. The charitable trusts we have established provide continued support to our heirs in their lifetime while helping to secure freedom for all Americans for generations to come." said Barbara Rumpel.