Giving to Make a Difference 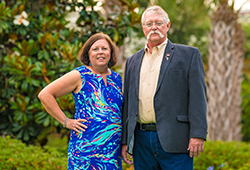 Ring of Freedom Heritage Society members Barry and Laurie Partlo share a favorite well-known quote from President Ronald Reagan: "Freedom is never more than one generation away from extinction." The value the Partlos place on their Second Amendment Rights is one of the key reasons they support the NRA now and have chosen to leave a legacy with a gift of life insurance.

"There are more than 50-million-gun owners in the U.S. and only about 5.5 million members of the NRA. That just doesn't make sense," said Barry.

In addition to NRA's legislative efforts, Barry and Laurie also share a passion for NRA's youth programs. "Youth are the future of the NRA," Barry said. "Laurie and I have always supported educational programs in our community through our company and our volunteer efforts." (The Partlos own Agri Supply, a farm machinery and equipment store with nine locations across the southeast.)

"The NRA has a number of worthwhile endeavors targeting the next generation—from the Eddie Eagle GunSafe Program, to developing ranges across the country and promoting safety in schools, to sponsoring youth shooting events," continued Laurie.

A lifetime NRA member, Barry grew up participating in shooting sports. "I vividly remember shooting .22 calibers with my Dad when I was a child," recalled Barry. "I've hunted all my life."

Though she didn't grow up participating in shooting sports, Laurie proved to be a quick learner after Barry taught her how to shoot. "I was the North Carolina Sporting Clays Women's Champion in the early 90s," she said. Laurie joined the NRA almost a decade ago and enjoys attending Women's Leadership Forum events as well as attending Ring of Freedom events and NRA Annual Meetings & Exhibits with Barry. "We have always contributed what we could when we could," Barry said.

In keeping with this commitment, the Partlos have named the NRA as the beneficiary of a life insurance policy. "There are many ways to support the NRA—both now and after your lifetime. The beauty of life insurance is that we can leverage the gift we make today confident the NRA has an asset that will be worth much more in the future," he explained.

Ronald Reagan also famously said: "We can't help everyone, but everyone can help someone." The Partlos have embraced this philosophy as evidenced by their community involvement and tireless volunteer work. "We live in a small town—there are many ways to make an impact with time and money," shared Laurie.

Laurie believes in making a difference in the local community. She is a dedicated volunteer in her community and has served on the board of many local nonprofits and is currently serving on the board of the Johnston County Community Foundation.

Barry is a former Cub Scout leader, a member of Rotary for 37 years, a former board member and president of the Johnston Community College Foundation in Smithfield, NC and is a committee member for a sporting clay tournament for Treasure Coast Hospice in Stuart, Florida.

"We feel like we are living the American Dream," Barry shared. "Laurie and I both come from relatively poor families who came to America a few generations ago seeking freedom. Our parents valued education and hard work which are values we have instilled in our children."

"We've been blessed to live the life we have lived," continued Laurie. "We hope through our support we can make a difference."