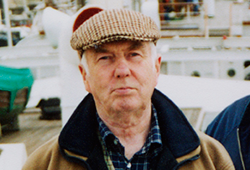 Peter "Bill Sykes" Rundle's support for the Second Amendment began early in life. From his earliest days, Peter was obsessed with all things American, especially cowboys. As a young man, living in the small dock town of Penarth, Wales, the Second World War brought American soldiers to his shore. Peter was excited to finally interact with his heroes and over the course of the following years, American forces took over the dock, modernized it, and turned Penarth into an American garrison town. Camps were established all around town and scores of Ship Owners large houses were taken over as officers' accommodations. Much to Peter's delight a very large camp was established in the woodlands directly across the road from his home.

Friends report that throughout his life Peter extolled the virtues of the American Constitution and wished Briton had one of its own. He read copiously about American history, especially the Wild West. Peter always believed British citizens should be able to carry firearms for personal protection, calling them "an equalizer." He would speak at length, working to convince people that a large percentage of crimes in Briton would be prevented or greatly reduced if members of the public could defend themselves.

Up until his death in 2012, Peter's two main heroes were Charlton Heston and John Wayne. Peter often recited Heston's speeches about the right of the people to keep and bear arms to his friends. He wrote dozens of letters to members of Parliament over the years, lobbying for the expansion of British citizens' firearms rights.

Peter was a celebrated shipbuilder and founded the Penarth Boat Building Company. He served in the British Merchant Navy and was a Freemason. Even though he lived across the Atlantic Ocean, it was his love of freedom and respect for the American Constitution that defined his last wishes. Peter left half of his residual estate to the NRA in order to strengthen the fight for firearms freedom.

Today, Peter's legacy lives on through the gift he left to the NRA. Those resources go to supporting the programs and efforts that affect millions of Americans' lives and set an inspiring global example. The NRA is grateful for patriots like Peter — both on and off American soil. Charlton Heston surely would have been honored to thank Peter for his gift and dedication to Freedom.