Leave a Legacy Through your Will, your Trust, and your Estate Plan. 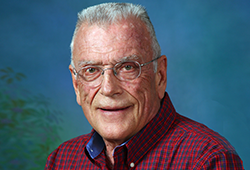 By: Jim Smith
Jim Smith first joined the NRA in 1961 and served on the NRA Board of Directors from 1982-87. He joined the NRA Ring of Freedom Heritage Society as an Ambassador Member in 2014 with a gift through his trust to the NRA Whittington Center.

Recently my wife and I decided to update our family trust. It had been ten years since we moved from Colorado to Arizona. There were some changes I had been thinking about making. One was to establish a program to leave a few dollars to a couple of organization's to which I have belonged and worked for over my life. High on my list was the NRA. Over the years I have instructed hunter safety classes for a great number of kids and young adults. I spent six years on the NRA Board of Directors. I was a certified instructor in rifle, pistol, shotgun, and home firearms safety. In addition I was a competitive shooter in rifle, pistol and shotgun. I love the NRA and decided to do something to "give back" for all they have done for me.

I called my good friend Mike Ballew at the NRA Whittington Center in Raton, New Mexico. We talked and he suggested I contact David Kelner who lives in Arizona and is the NRA – Advancement Officer, for the Southwest Region. I couldn't have asked for a better person than David to work with. David did a fine job of getting me lots of pamphlets and brochures to read up on.

When we moved to our current residence, I had seven, moving boxes full of hunting, fishing and camping books. Many of them were personally autographed by the authors. I donated them all to our church not knowing that I could have donated them to the NRA. At that point I could have cried. I had a reasonable collection of guns, including competition pistols and trap, skeet and sporting clay shotguns. Also some beautiful hunting rifles in all the right calibers and scopes. I sold most of them, fortunately I still have some left and those I will be donating to the NRA Whittington Center. I also learned that I can donate my large gun safe, hunting gear, knives, wildlife art, sculptures, wood carvings, etc. that I have collected over the years.

Now here is the deal! It costs me nothing to do this. The transfer can be made upon my demise (assuming I go first) and leave whatever my wife would enjoy keeping in memory of me. Upon her death all remaining items will be turned over to the NRA for their disposition.

I gave my attorney's phone number to Kent Smith, the NRA's Assistant Director of Planned Giving for the Western Region. They communicated and within a few days I had my final draft of my family trust.

There are two NRA brochures that you are going to want to be sure you read
1. NRA Member Planned Giving Guide, i.e., Creating a Constitutional Centered Will
2. The NRA Firearms For Freedom brochure

NRA can also provide sample trust provisions in addition to the brochures I mentioned. When you start this process, you have access to NRA attorneys and gift planning consultants through the Office of Advancement, but most importantly it's all for free.

Jim Smith is an award winning writer who has had a long career as an outdoor writer. He is published in MUSKIE Magazine, Boar Hunter Magazine and Sporting Clays Magazine. Recently he was inducted into The Fresh Water Fishing Hall of Fame as a Legendary Communicator. Retired now, he spends his days enjoying the Arizona climate and writing for pleasure. He first joined the NRA in 1961 and served on the NRA Board of Directors from 1982-1987. Additionally, he joined the NRA Heritage Society as an Ambassador in 2014 with a gift through his trust to the NRA Whittington Center.