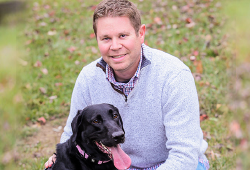 We've all heard the phrase: "It's not just business…it's personal." For Joel Altman, his motivation for leaving a legacy to protect the Second Amendment is both.

"My grandfather, who won the Purple Heart and Bronze Star, defended humanity from the Nazis during World War II with firearms. Our police and military protect us today with their firearms, and individual law-abiding citizens protect themselves and their families with firearms. The Second Amendment is perhaps the most important right we as American citizens have. With the right comes responsibility, and for those of us who are good citizens, the right must always be there," Altman said.

Altman's passion for gun ownership, gun safety and the vital and ongoing work of the NRA is evident. Altman is a U.S. Coast Guard reservist, a K-9 handler and current member of law enforcement in the Cincinnati area. He began his career as a federal police officer in Washington, D.C., deciding on this path after the events of 9/11.

"From an early age I was interested in firearms," Altman recalled. "My dad began secretly taking me to the shooting range—my mother didn't want me to shoot guns—after he inherited my grandfather's WWII pistols. Over the years, we purchased a new firearm here and there. I began shooting trap and became more familiar and proficient with pistols and revolvers. Eventually my mom came around."

"As a parent, I am a huge proponent of the Eddie Eagle GunSafe program and want to see it continue. Keeping people safe around firearms is important to me as a police officer. I try to hand out literature about the program to young people when I can," Joel shared. "I also support NRA law enforcement firearm training. My time serving as an officer for the federal government showed me the deficiencies in training on the local and state levels."

"I joined the NRA when my wife and I were living near the NRA headquarters in northern Virginia. Because I was so close, I visited the National Firearms Museum and NRA shooting range often." Altman is a Life Member as well as a member of the Ring of Freedom Heritage Society, committed to "leaving a lasting impact for NRA's fight for the Second Amendment." Altman has included a gift to the NRA in his will. "The fight to protect our Constitutional rights is ongoing. Every gun owner should be a member of the NRA."

In addition to his busy career protecting and serving, Joel has authored several children's books. "I'm hoping one day to write one for the NRA," he said. "The NRA is one of the few organizations that defends our Constitution and the principles our country was founded on. In my life, I try to lead by example and treat others how I want to be treated."

"Unfortunately, we live in a country where there are those who are trying to turn America into something it wasn't created to be. The NRA is one of the few organizations that takes a stand. Brave Americans who came before us have fought for our freedoms with firearms—it's up to us to make sure those rights are there not only for our children but for future generations."